It didn’t take long for me to recover and soon I was back in the garden, reaping the rewards of my hard work. It certainly pleased me when I would bring in baskets of my own home-grown fruits and vegetables.

Of course, I was taking all the necessary precautions now, in regards to my wellbeing. Celeste was right—I had to be responsible for my own health. So, I made sure that when I spent hours in the garden, I had lots on sunscreen on and drank as much water as possible.

Of course, I wasn’t alone in the garden. Ursa made sure to always stick nearby—I think it was some specific dog quirk of always needing to know where the human was. I didn’t mind. She was sweet and having an excited dog nearby can make even a dull day better.

Ever since we became an item, Celeste and I would go out of our way to call and write to one another. Because we both spend long hours busy being one with nature, we often didn’t get to spend much time with one another. Deep inside I was planning to propose to her as soon as I had a decent amount of money in the bank—I didn’t want to be that guy who couldn’t provide for his beloved.

It was when I felt lonely that Ursa’s company couldn’t be more welcome. She was always so happy to spend hours playing with me or just sitting nearby. It was absolutely endearing. I thanked my stars for that rain that caused my furry friend to seek out shelter at my exact house.

From asking around, I knew that there were two popular stores around that always accepted locally grown produce. As soon as I had enough specimens, I made sure to sell my goods at both stores. As a result, I ended up earning quite a bit of money which made me worry less about paying the bills.

Still happy from the incoming cash, I got a call from Celeste.

“Hey, hon. Are you busy this afternoon? If not, come to my place!” she invited.

I didn’t need to be asked twice.

Celeste’s house was a small wooden cabin, but it felt very homey. It was just like her to live here.

“Come on in” she called me inside, where I was instantly met with happy barking. “Hawk, meet Simon. Simon, this is Hawk.”

The puppy was small, but he was obviously very energetic and wanted to sniff me and know everything about me.

“Come here, Hawk!” I called the pup over “Well, aren’t you a cutie! Just like your mommy!”

Celeste blushed, continuing to cook “I have some friends coming over. I thought it would be a good chance for you to meet the locals, since you’re new here.”

“That’s a great idea” I admitted. “Working in the garden all day, you don’t really get to go out and mingle much.”

“Well, here they are” she nodded toward the door.

Two men and one woman arrived at Celeste’s house. Frankly, they couldn’t have looked more different. I guess Celeste had a unifying effect on people. 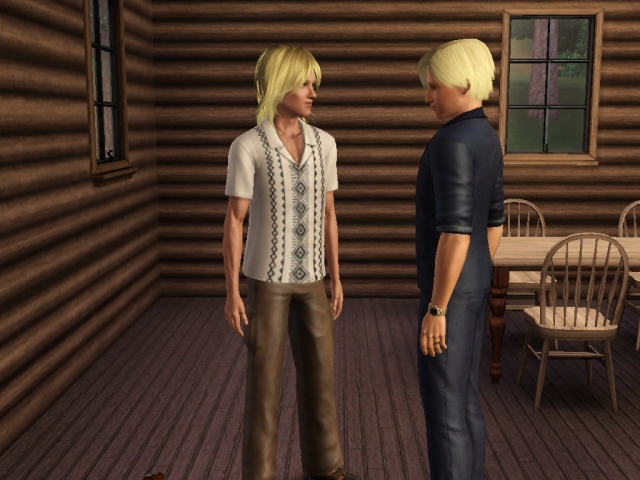 The tall blond man turned out to be Sebastian Vanderburg and his family was somewhat well-known around town. Old money or something like that. He greeted me amicably enough, although it seemed that his mind was elsewhere and that he felt stressed out about something. Considering that I barely knew him, I thought it was best not to prod.

The woman turned out to be Madeline Moore. She knew Celeste from the latter’s brief stint of working at the science facility, where Madeline still worked, or rather was planning to return to—she recently had a baby and had to take a maternity leave.

The older man was Carl Abbot, a former military man, who took one look at my unkempt hair and “hippie clothing” and made up the opinion that I was a useless youth. I guess he was the sort of person who believed that discipline was very important and that young people were out of hand. If not for Celeste and Madeline joining our conversation, he no doubt would have gone on a tirade about modern economy and politics. I guess some people had no idea what constituted friendly party conversation. 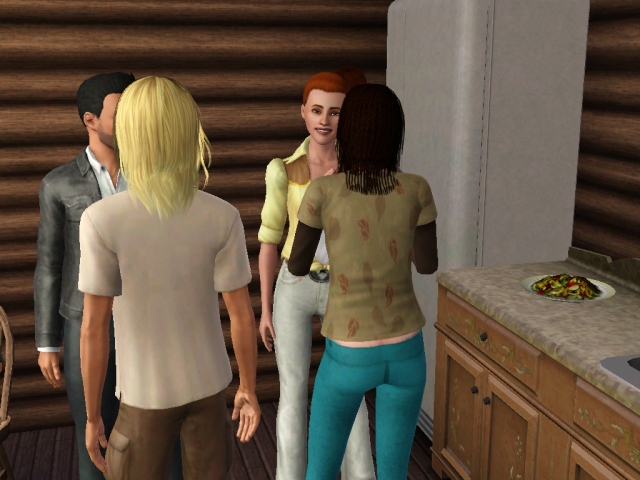 “So, how’s the baby doing? With those first teeth coming in, I know you two aren’t sleeping much” Celeste sympathized with Madeline, who snorted before regaining her composure.

“Yeah, the kid has been a handful. The doctor says it won’t be much longer now though and then we’ll get some peace and quiet!”

“So, as I was saying, these new trends, with people obsessed with all the organic stuff, are quiet bothersome. I mean, in my day we were happy to have food on the table!” continued Carl, clearly not knowing what I did for a living. I guess he noticed my consternation since he did eventually ask “So, young man, what is it that you do for a living?”

“Well, sir, I’m a farmer. I keep a plot of land not far from here, actually” I admitted, trying hard not to laugh.

Carl’s eyes went bigger and Sebastian, sitting nearby, laughed “Well, Carl, looks like you should watch what you say to people. And loosen up on the guy, he’s done nothing wrong!”

While the guests were busy talking to one another I inquired from Celeste how she got these very different people to get along with one another. She just at me “I guess I just provide a friendly place for them to enjoy each other’s company.”

Over dinner, Carl once again started to bring up politics, so I did what my parents taught me to do in such a situation—change the topic. I began to talk about science and astronomy, with great detail and attention to all the scientific formalities. In a couple of minutes, Carl looked as confused as anyone could be and an unpleasant dinner was avoided.

Sebastian was still deep in thought about something. Noticing our concerned expressions he explained “My sister and mother had another fight over Mom constantly nagging Francisca about her husband. I mean, first she was nagging her about getting married, but Franny basically ran off from home and now has her own life. Seriously, she is a mother herself now, my mother could learn a bit about normal human interaction, you know. But I’m sorry to load this on you” he apologized.

“Oh, it’s no problem. I understand family can take up a lot of our worries.” My words relaxed the man considerably and he gave some semblance of a smile. 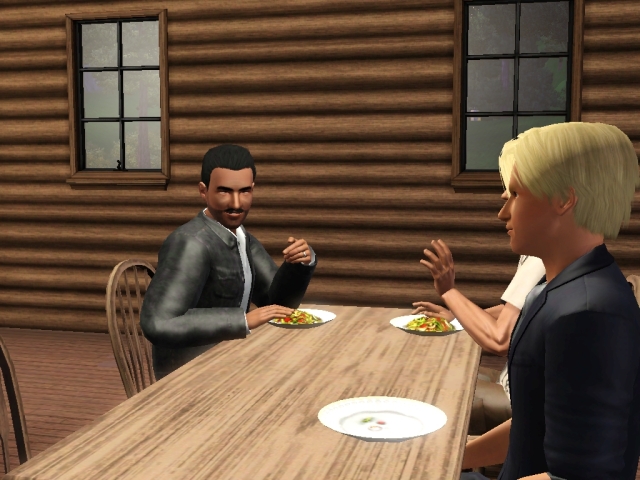 “Thank you for the offer” I happily agreed. “It would also be great to meet her, since I still don’t know many people around here.”

After the dinner I approached Celeste with a bouquet of flowers I’ve stashed earlier. Guess who’s sold a whole bunch of home-grown produce today?”

“Oh, that’s wonderful!” she gave me a thumbs-up. “I told you you’ll succeed.”

Seating near a flower bush outside, I thanked Celeste for inviting me “It was interesting meeting these people.”

She laughed and whispered in my ear “Thanks for not blowing up at Carl! He is really a pretty good guy, but you know, has some rough edges. His face when he found out you’re one of those ‘organic farmers’ though!” her laughter was too quiet to be heard in the house, but to me it was music. 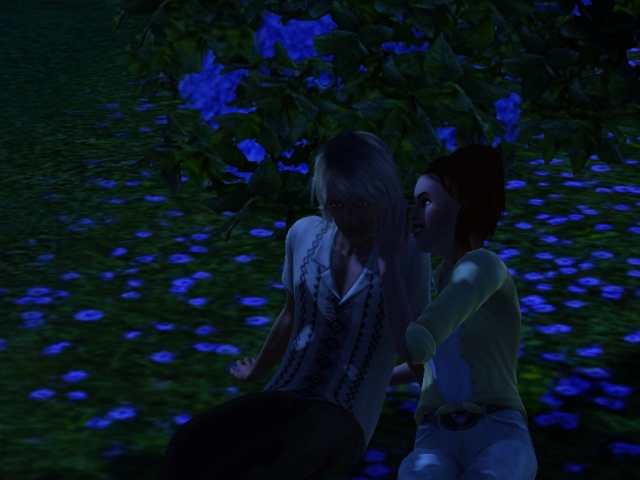 “Well, we had people like that in Starlight Shores as well, I’m used to them. I had a teacher in high school who honestly considered agriculture pointless.” He was quite a character too, although if we followed his guidelines, our chemistry lab would have caught fire ages ago.

“Oh well, I guess some people don’t know what they’re talking about, right?” she shook her head.

“What is Appaloosa Plains like?” I asked. We haven’t really talked much about her past or hometown, although her memories of it seemed to be warm.

She leaned back and wistfully looked up “It’s really nice! If you like much more rural places, that is. Not to say that farming and ranching are the only thing people did back there, but you would definitely see lots of huge fields and then there were ranches and horses and hay…”

“You really love it, didn’t you?” I realized.

“Oh, I do” she admitted. “I only moved here because of my health. I’ve always been a pretty sickly kid. It’s sort of been in the family—my mother passed away from cancer when I was just a teenager. The doctor told us that I was at an increased risk of contracting the same form of disease as mom. Well, Dad found out about this place—they say the land and air here are healing. So, as soon as I turned 16, my brother and I came to stay here, so that I could get healthier. When I became 18, my brother went back home to help out on the ranch. I remained here. By then, fishing was already my passion and Hidden Springs is as good a place for that as any!”

“You really miss it then…” the wistfulness was clear in her voice.

“Oh, I visit a lot” she assured. “Mostly for the holidays though. I’d say, I’m definitely a Hidden Springs person now. That just doesn’t mean I forgot my country roots!”

“Well, I’m glad you’re here, to be honest. We wouldn’t have met otherwise” I admitted.

“So am I, Si, so am I. Who knows though, maybe one of us would have found a way to Appaloosa Plains or Starlight Shores at some point though?” she imagined. We both knew it was pretty unlikely though. “Should we head inside? I think the others want to go home now and don’t want to leave without a proper parting.”

While she thanked the guests for coming, I helped Celeste out by washing the dishes. Little Hawk watched over me approvingly. I imagined he’d get along pretty swimmingly with Ursa.

After everyone was gone, I knew I didn’t want to say goodbye to Celeste, but it was late and neither of us has talked about taking the next step in the relationship yet. Honestly, I didn’t think either of us had any experience with that next step.

“It’s been a wonderful evening, Celeste” I headed towards her, kissing her gently. “I will see you soon. My garden needs less care now—we can have more time together.”

“Will do” I laughed and headed home, while a huge part of me wished we lived under the same roof.